I have another blog that is titled, "... and then it died."  That one is about the Bailey's living their lives of "adventure" which sometimes includes livestock meeting their untimely ends on our farm.   Sometimes the "adventures" make more sense in my other blog.  Sometimes they belong in both.  Like this one.

Death once again visited our farm. This time it took one of our more beloved guests on the farm.

About four years ago we were offered three free wethers. Their names were (are) Sam, JR and Zephyr. I'm not sure who named them or why, but I do know that the person who had them before us couldn't keep them and wanted to find them a good home. As I've said before there's no such thing as a free llama or any other kind of "free" animal. But, I can say that some animals are closer to being free than others. These three Romney crosses fit that description. Our primary up front costs were the trip to Letts, IA, near Muscatine, to pick them up. At 8 miles to the gallon and a 352 mile round trip, you can do the math. As wethers they weren't going to give us lambs neither as mothers or fathers. Their sole purpose on our property would be to deliver us nice fleeces once a year. Two of the three wethers did that and more. 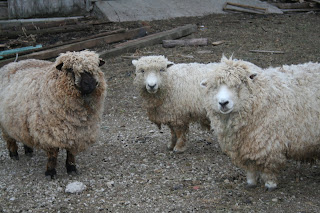 "The Boys" - J.R., Sam and Zephyr from L-R
Sam's fleece was always thinner and not all that desirable to home spinners. Also, unfortunately, Sam was far less stout that either Zephyr or JR. He succumbed during the winter a couple years ago. We had sheared the "boys," as we called them, in October. That's usually more than enough time for a sheep to regrow sufficient fleece to keep them warm. But poor Sam shivered incessantly even early on that winter. I think he just wore out trying to keep warm.

Of the three boys, JR was the problem child. He was both a pain in the butt on the one hand and a wonderful source of fleece on the other. He was so skittish and contrary that he'd bolt the opposite direction I was trying to herd the flock. Sometimes I'd get the flock moving in the direction I wanted only to have JR bolt off in another with several sheep following. Typically it's futile to try and get the remaining sheep in the flock continuing in the intended direction. They wanted to follow JR and the few other wayward sheep. That meant getting them all together in a group again and starting the process of moving them all over again. He eventually settled down a bit, but he was never going to be seeking attention from his shepherds. On the other hand, JR's fleece has been coveted by hand spinners that we know. Not only do the hand spinners like the way it looks and feels, we liked it because of its size. 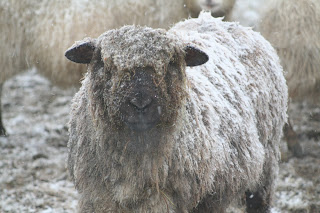 JR in Winter
While JR lives on, we lost Zephyr late last week. I knew his time was short. He was nine years old which is pretty good for a sheep. In recent months he'd lost a lot of weight. About a week ago I went out there and saw him staggering from weakness. Lorraine suggested taking him to the locker but I didn't have the heart. He was down to skin and bones and he was more like a pet than livestock. 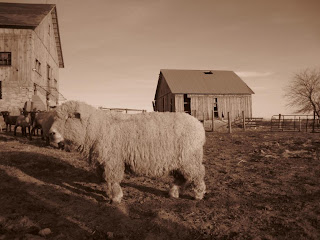 One of my favorite Zephyr pictures, taken by my son-in-law Jordan
I'm guessing Zephyr was bottle fed because he liked to be around people. He liked to have his head and back scratched, sometimes leaning into you as you tousled the wool on his head. And he was very patient and tolerant of the kids even to the point of letting them ride on his back. I always kidded that he reminded me of Eeyore, from Winnie the Pooh. He was so lethargic with a kind of mopey look on his face, locks of wool hanging over his eyes and with his head hanging down. Truth be told, he think he was actually pretty happy on our farm.

Of all of the sheep we've had I don't recall any that were like Zephyr. It was not uncommon for us to be sitting out in the pasture and for Zephyr to come and lay his head on our knee to be petted. I've heard Lorraine shriek on more than one occasion, thinking that something was about to bite, sting or do something else equally unpleasant to her. She would turn only to see Zephyr with his nose to her ear, waiting to be petted.

I think every farm needs a Zephyr. He will be missed.

I wonder who will take his place in our hearts.
Posted by Hedgeapple Farm at 4:57 PM

Hedgeapple Farm
I'm happily married (Lorraine) and a father (mostly happily) of eight children ranging in ages from 29-13 and grandfather to three. Lorraine and I have been married 31 years and have had gardens and/or livestock most of those years. We started out as hobby farmers in 1994 with some goats and chickens. For a few years we expanded to include sheep, cows (beef and dairy), chickens and llamas. In June, 2017, we retired from farm life and moved to the big city (Dallas Center, IA) into a church that was converted into a house.